Add description and links to your promotion

Add description and links to your promotion 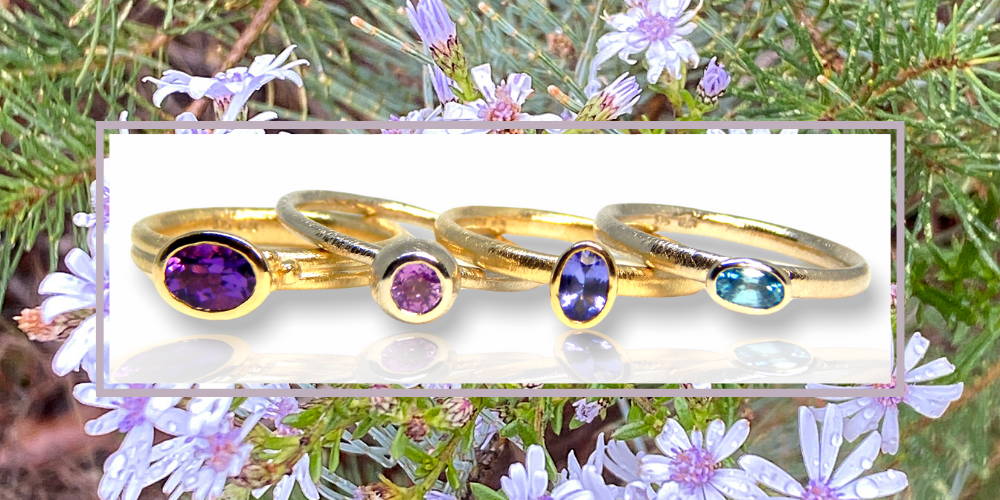 Makuru - The Season Of Purple Gems

On a Friday 13th in June 2008, we landed in Western Australia - the first time round! I was 3 months pregnant with Ruby, my eldest at that time - and she’s a teenager now.

I remember leaving Ireland and packing a suitcase with ‘spring/summer’ clothes and then arriving in Aus to discover everyone wearing puffa jackets and seeing lots of hats and scarves…and ugg boots!

Surely its NEVER cold enough in Aus to wear winter woolies and furry ugg boots? I mean for us, the temperature at this time was equivalent to an Irish summer’s day - ha ha!

It wouldn't be until the following year that we discovered just ‘why’ people need warm clothes - and that's because June & July are considered to be winter and the temperature has dropped nearly 20 degrees from what everyone is used to.

That second year in Aus, yes I did indeed need to buy ugg boots - which I still have, and wear from June time!

In fact when we first came to Australia, we were told that WA has 8 months of summer and 2 months of winter!
And I never really got that saying till now - cause it only adds up to 10 months lol - but we have 10 months summer, 2 months cooler Spring and 2 months of winter!
I have been fascinated to discover that the Aboriginal people of W.Australia have SIX seasons.
The traditional FOUR seasons that we know of - Spring, Summer, Autumn & Winter - are seen to be an 'imported' 'Northern Hemisphere' notion.
Add to that the fact that we are 'upside down' here means that the seasons are reversed anyway. So whilst most of you in the Northern Hemisphere are going into the 3 Summer months, here we are entering the 'traditional' 3 winter months of June/July/August.
BUT, the reality is, that here in W.Australia, these 4 seasons just didn't 'fit' in with what happens with the climate and the land.
The local indigenous people of WA are called the Nyoongar people and their knowledge of the land spans back 10's of thousands of years.
The SIX seasons are:

According to the nyoongar calendar, June and July in WA are our ONLY TWO months of winter!

This is the coldest and wettest season of the year. And I can totally vouch for that!

Ironically 'cold' though is NOT the same as cold from Ireland or Scotland as it can still hit 20 degrees here when the winter sun comes out! But when you are used to 40 degree heat, that sudden drop in temperature seems freezing! And of course the temperature drops in the mornings and evenings to around 9!

For the traditional Aborignal people, Makuru was a good time of the year to move back inland and away from the coastline as the winds turned to the west and south bringing in the cold weather and the rains.

Food sources changed from sea, estuarine and lake foods to those of the lands - particularly the 'Yongar' or kangaroo. Kangaroo not only provided meat to eat but also hunting tools like spears and 'bookas' - which were animal skin cloaks used as the mornings and nights became much cooler. 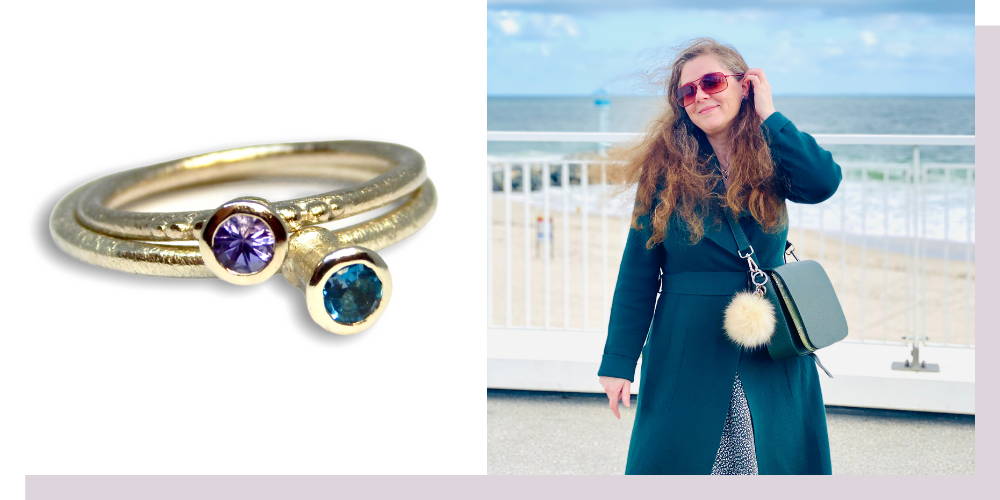 (Right) Me 'Cosied Up' In A Winter Cardy At City Beach, WA

Makuru - known as the Season Of Fertility - is the time of year when many animals begin to ‘pair up’ in preparation for breeding in the coming season.

You’ll start to see the huge black 'Wardongs' (ravens) flying together. Apparently if you listen carefully, you’ll notice that at this time of year these raven pairs don’t make the usual 'ark ark arrrrrk' that they are well known for when flying solo.

You'll also start to see a large influx of the Black Swan or 'Mali' within the rivers, lakes and other waterways as they start to prepare to nest and breed. And we’ve seen lots of black swans upon our travels - the namesake of the Swan River in Perth itself. 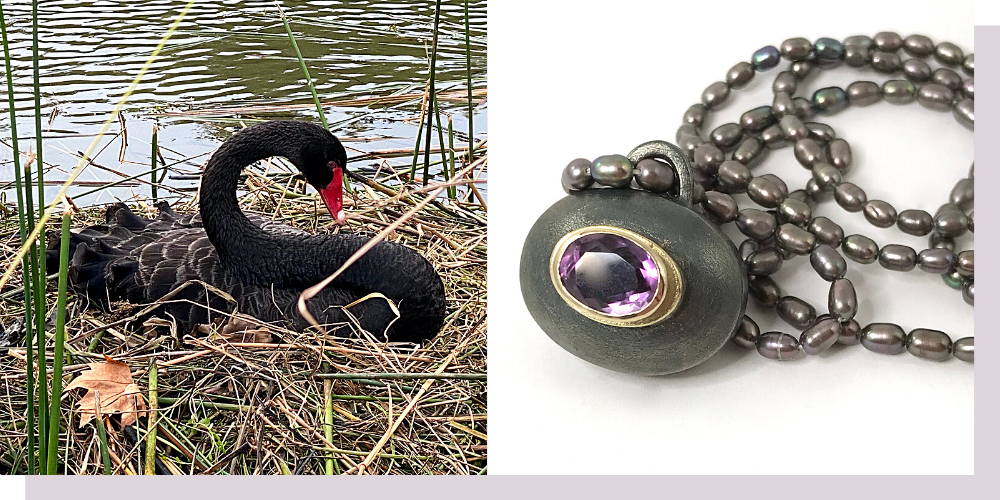 According to the Nyoongar calendar, the flowers that start to emerge during the 2 winter months are typically blue and purple in colours. Such as the blues and purples of the Blueberry Lilly (tucker bush) and whats known as the Purple Flags (a type of iris).

But I've had a look through my photo feed from June & July during previous years and my own photos seem to be full of pink and red flowers - especially that of the native Banksia trees.

Or maybe these colours - pinks - are the ones my eyes are drawn too as I’m partial to the colour pink in my jewellery.

And towards the end of the season the blue and purple flowers are said to make way for the white and cream flowers of Djilba - the first Spring. 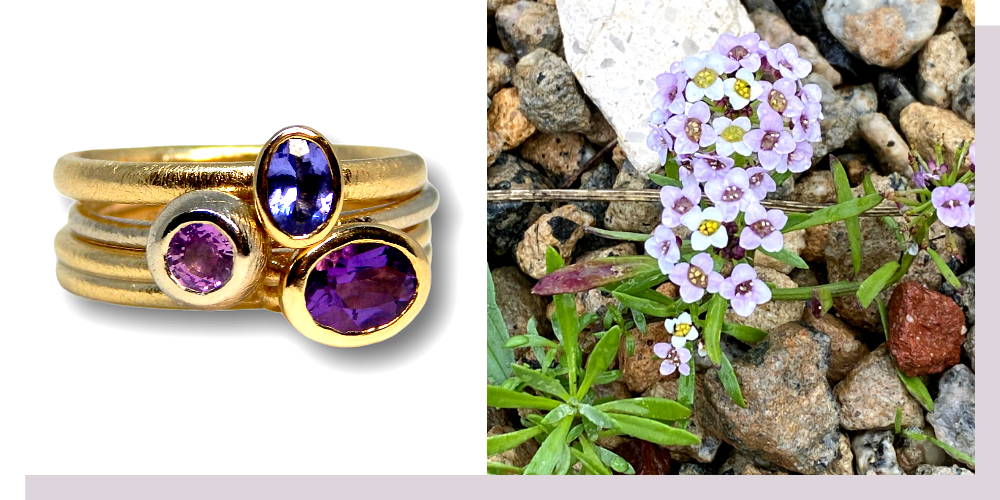 (Left) Set Of Stacking Rings For Jo In Shades Of Purple & 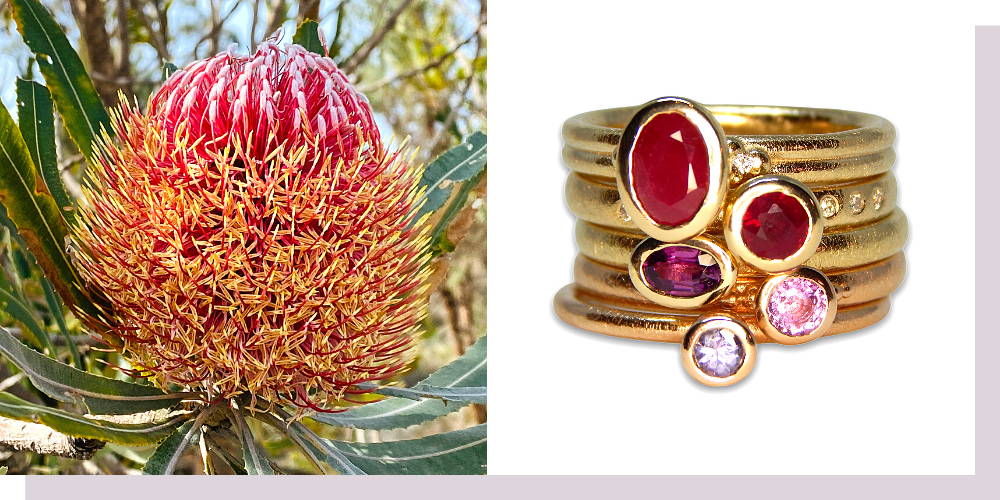 When I read back through these words, for me an aboriginal winter in WA is therefore associated with the black colours of the ravens and the swans as they ‘pair up’ for love. Maybe this is where the red comes in - the season of fertility…and love. So the colours of black mixed with a pop of pinks and reds.

And then we have the bluey purples of the flowers.

In terms of stones, this gives me a very rich colour landscape of black mixed with reds, pinks and purples. Perhaps some visual inspiration for my next ‘winter’ collection of jewels? 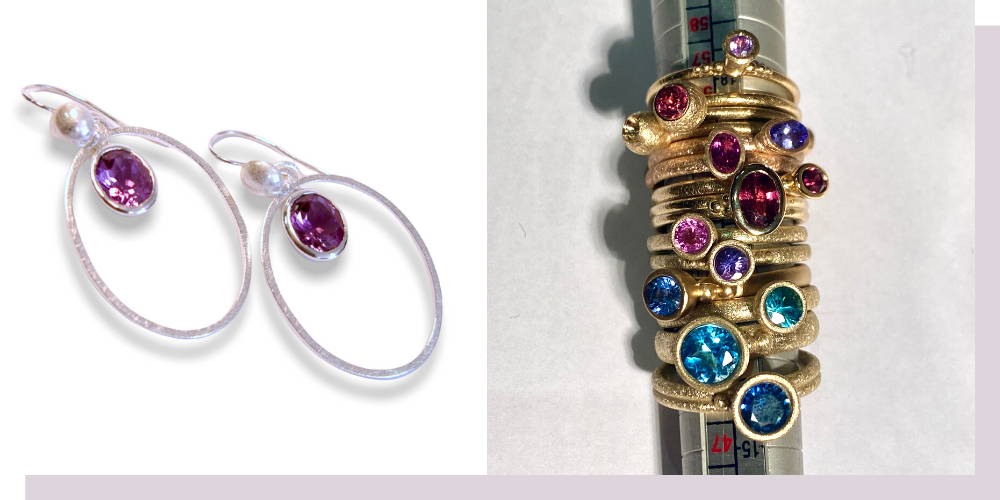 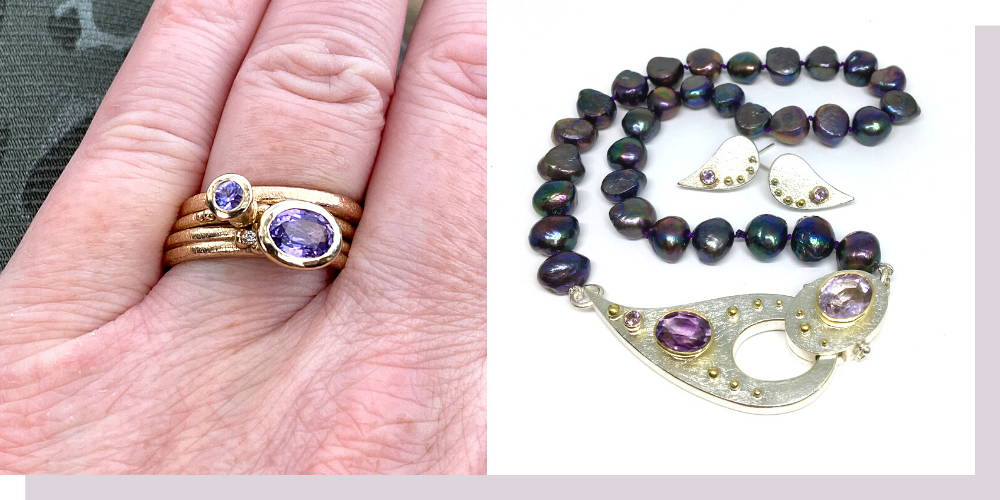 So Lets 'Cosy Up' For Makuru Winter, With Pairs of Jewels Like Rings & Earrings In Rich Shades Of Purples Mixed With Black! Tourmaline - The Protective Shamanic Stone To Help You Become Electrically Charged And Attract Love, Luck, Success And The Power To Manifest Your Goals Lapis Lazuli - The Stone To Help You Reach For The Stars, Speak Your Truth & Protect You Against The Evil Eye